I have been building, modifying, and repairing guitars for twenty plus years.

Having worked for various people honing my skills, I opened HotRod 6 Strings, a shop specializing in all aspects of guitar work, from repair work to custom builds from scratch.

This is where I met Eric Bromberg, an avid guitarist himself. Eric brought me an opportunity to feature some of my orginal guitar designs to the very first Life Is Beautiful Festival in Las Vegas.

This is when I decided to change the name of my original-designed guitars to Tatalias.

Eric came to my shop one day and asked if I would like to build a guitar for Todd Rundgren, and of course I jumped at the chance!

One of the cool features on this guitar is the cutaway. Todd wanted a 24 fret neck to accomodate this feature and not have the guitar feel awkward, so I came up with this unique cutaway. Other customization features Todd wanted were a specific neck profile similar to “Foamy” a bound ebony finger board and small pearl dots on the face.

On the electronics side, Todd wanted a piezo pickup. The magnetic pickups are EMG’s which Foamy has also. Although he specified 2 humbuckers for this build.

Eric and I went to deliver the guitar to Todd while he was rehearsing for his latest tour. I was so stressed out! Was he going to like it? Would he even play it? Or was this guitar destined to become a guitar that lived in a closet or storage…This is Todd Rundgren and guitars are not in short supply for such a renowned artist, composer, producer, and performer. I was stressed!

Well, it turns out that he does like it, and gave it the name of “Boney”. I’m very pleased with the outcome of this experience! Getting to work with Todd, and meeting his very gracious wife Michele, was a real dream come true.

Being a musician myself, I have lots of respect for Todd and his music-come on, this is Todd Rundgren! It was such a thrill to be able to spend time with someone who has contributed so much to music! And plus, he’s just a really cool guy! 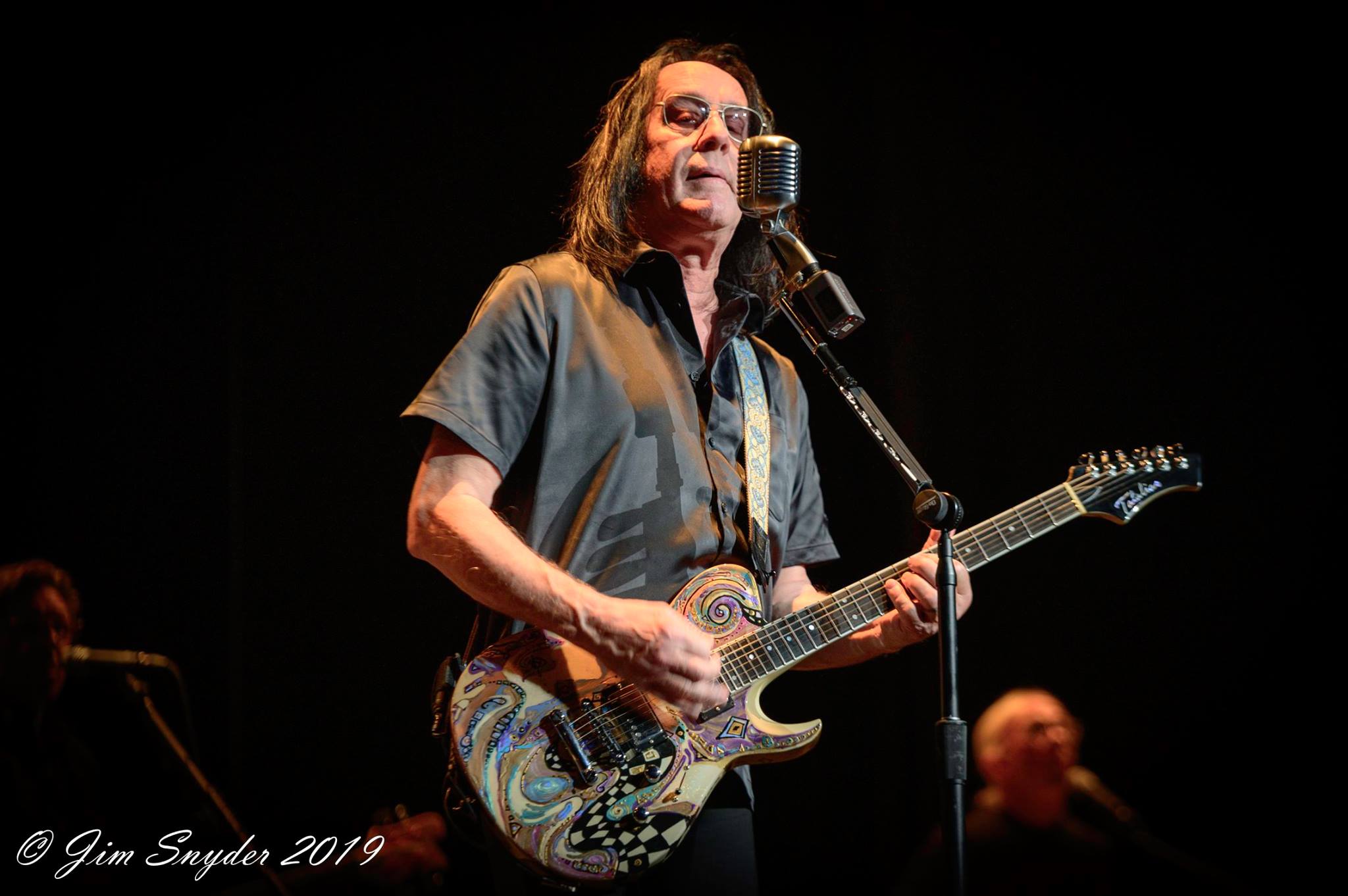 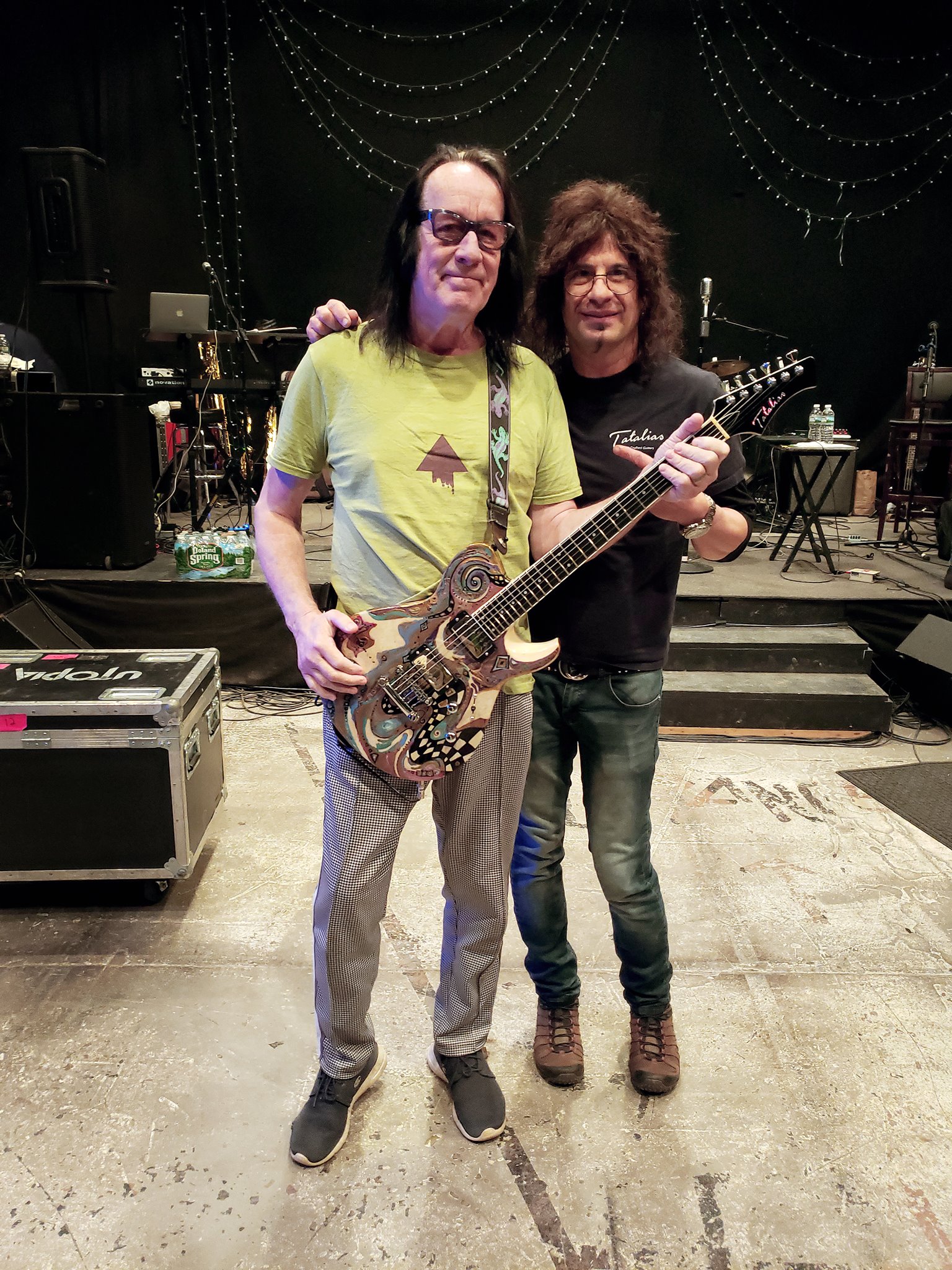 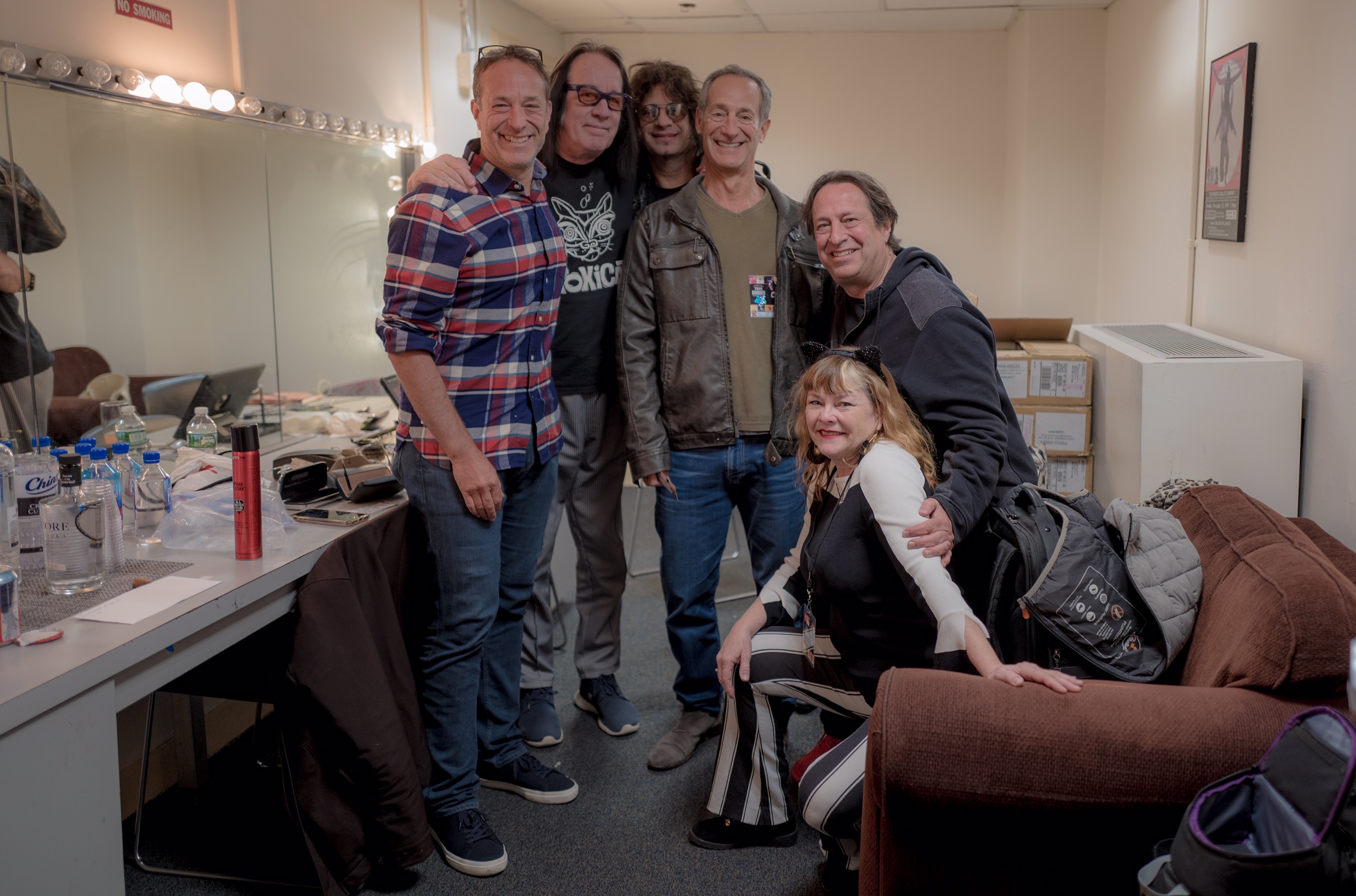 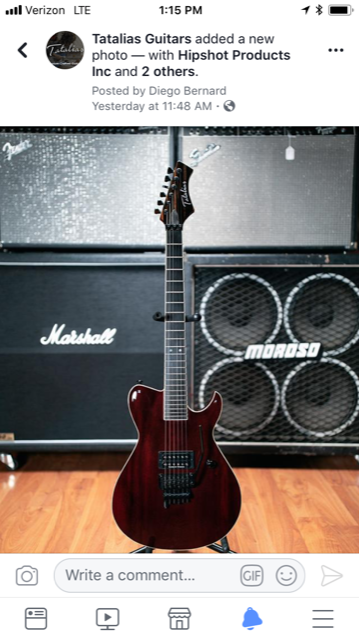 Todd was shown this guitar and decided he liked the look, feel, and sound of it…this is where and how the journey started.

The carving and shaping of Boney under way, so many things can go sideways from this stage until it’s in the hands of the artist, this build was detail intensive. 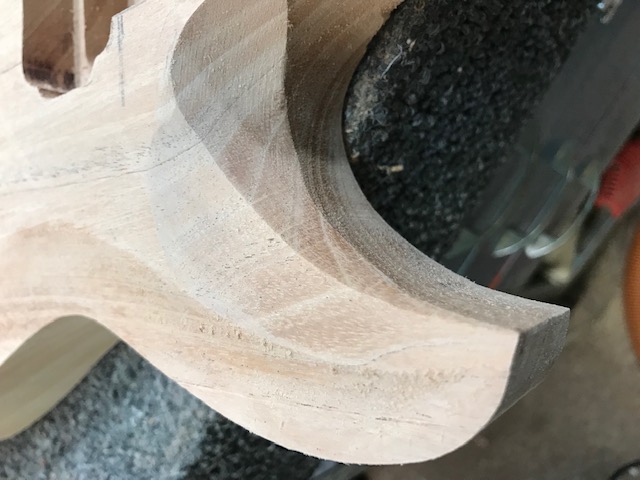 As a guitar builder, I pain’s takingly try to remove as little of the wood as possible. Each pass during the handcarving process comes with a lot of study after any little bit of wood is removed. 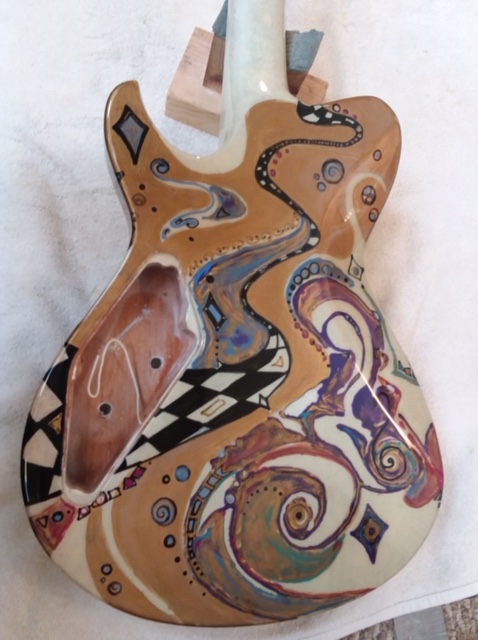 Here is the guitar after the custom artwork and finish were completed. Cue from Gerhard’s Guitarworks worked with us here at Tatalias Guitars, amazing work!

The Making of The Custom Artwork

In April, 2019, we celebrated the debut of Todd Rundgren’s new guitar which was created by Chris Tatalias, in collaboration with Robert Cue Gerhards and Noelle Ghnassia Damon. Delivered to Todd at the Utopia Sound Stage in Woodstock, it was immediately taken on The Individualist Tour, and had its debut at The Town Hall in NYC, where Todd was met by enthusiastic fans and rave reviews.

I was commissioned to do the artwork for this guitar by luthier, Robert Cue Gerhards (Gerhards Guitarworks, Windham, NY) for the beautiful guitar fabricated by luthier, Chris Tatalias(Tatalias Guitars, Brookfield, CT). The project was to fulfill Todd’s request to create a completely unique design. We embarked on a collaborative process: Cue and I explored concepts, patterns, and colors; he created templates for multiple mock ups, and we ran ideas past Chris for his feedback. Meanwhile, Chris made his exquisitely shaped guitar, light as a feather and beautiful to the touch. Cue followed by preparing the guitar with an iridescent base coat which became the canvas for the painting, and upon its completion, he finished the body with layers of topcoat to provide its superbly smooth finish. The final assembly was done at Chris’s shop, Tatalias Guitars.

The painting that ensued was an abstract expression influenced by Todd’s overall style as a rock music icon, and studio wizard who has woven his magic within the industry for the past 52 years.The winding, checkered road is symbolic of Todd himself, the persistent guide paving the path for others, providing sure footing to the musicians he produced along the way. Surrounding him are masses and vortexes symbolizing the changing culture, the changing climate, the clashing and overlapping waves of influence through which he created his unique imprint on the world. On the back of the head stock, is a photo of Todd combined with an image of a white knight, paying homage to the man who has been the rescuer of many and an undaunted champion of the cause to celebrate life through music.

The painting is a combination of colors and patterns at play. It’s a design reflective of estuaries and the flow of frequencies, of circular time intersected by a more linear forms of time and space. The lines swirl and wind through and around each other as they engulf the entire guitar. In much the same way, Todd’s career has been winding and circling back upon itself, revisiting his old favorites, forging new tracks, wrapping himself around his work, and performing his wizardry.

My great appreciation to Cue and Chris for involving me in this project. And a special thank you to Todd Rundgren, for all he has done for the world through his magical love of music. 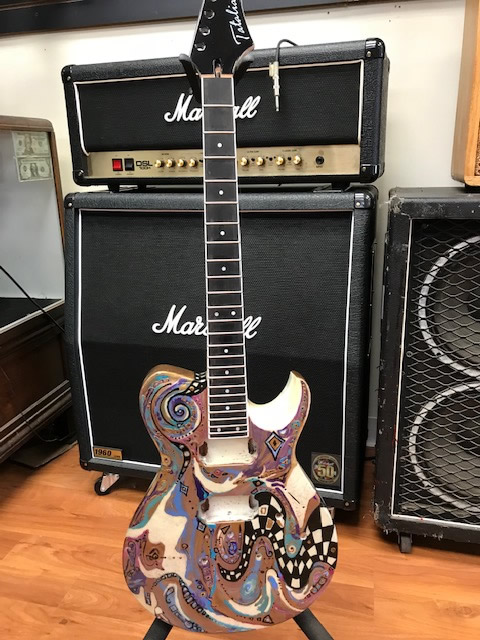 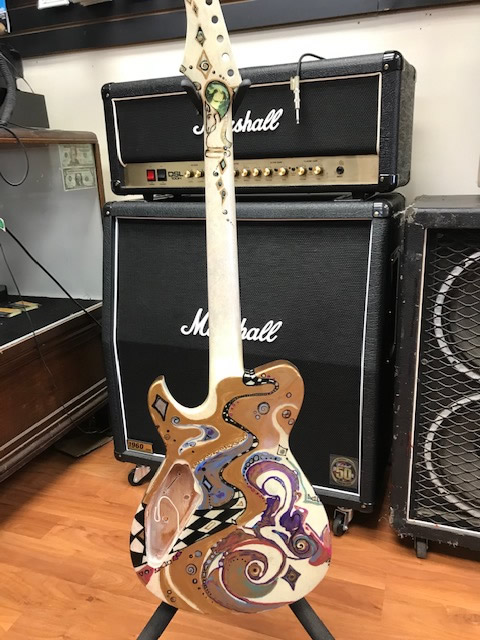 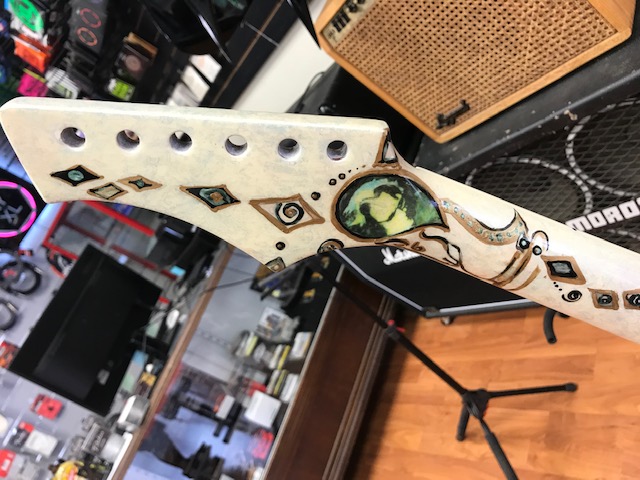